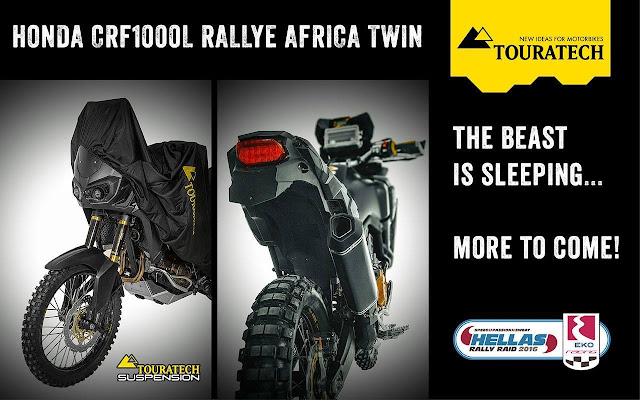 It might not yet look like it in our development workshop, but it'll soon be showing us just what it can do: Touratech is going on the Hellas Rally (8-16 May) on this Africa Twin, which is being converted to a rally bike.

With discerning routing, excellent organisation and a high-calibre starter field, the Hellas Rally has become the top event in the European off-road sport.

Furthermore, the rally (which this year is to take place from 8-16 May) is one of the last international events that accepts large volume two-cylinder vehicles – in its own separate class, of course. Reason enough for Touratech to enter the race with a specially converted Africa Twin. The bike is to be ridden by none other than Dirk von Zitzewitz, ace rally rider on two and four wheels and 15 times German endure champion.

Touratech's development workshop has fitted countless brand new parts to the CRF 1000L, while paying articular importance to the optimisation of the suspension. The fork has been upgraded with a Touratech Suspension Cartridge, which has increased the pitch of spring by an additional 20 mm. A milled aluminium hub sits at the centre of a high-strength Excel rim. The combination of milled hub and rally rim is also used on the rear, where there is also a specially-made Touratech suspension strut that provides an additional 25 mm  movement.

The ergonomics have been improved by a one-piece rally bench and higher, specially shaped handlebar. A lightweight Remus exhaust system comes courtesy of AC Schnitzer.
The cockpit has a fibreglass-reinforced rally front construction that will hold all the navigation equipment, from Road Book to GPS.

In line with the Touratech Racing Team's proven motto ("There’s no way of testing harder"), the use over six tough stages on various terrains ranging from mud and sand to rocks and forest trails will undoubtedly bring a wealth of experience that will go straight into series production.
We'll be providing daily reports with all the latest news starting on 9 May!