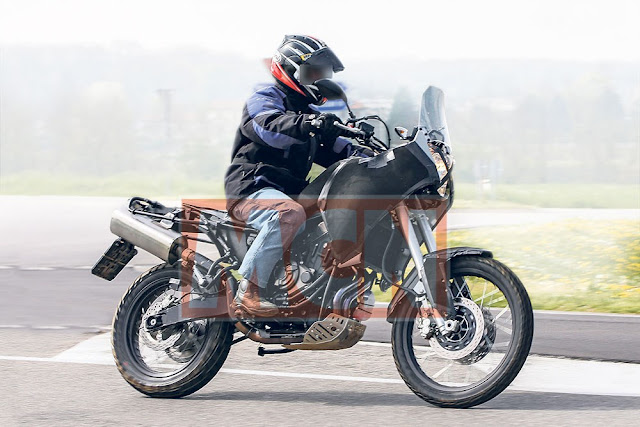 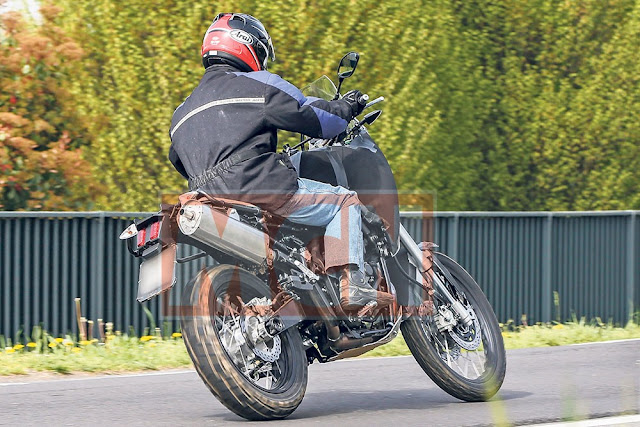 This is the world’s first glimpse of an all-new Yamaha MT-07 adventure bike, spied testing on the road in Europe last week, at least a year ahead of any anticipated official reveal.

Rumours of a new MT-07 Ténéré have been simmering for a few months but this bike, expected to be shown late in 2017 as a new model for 2018, has never been seen before and is completely different from the MT-07 Tracer spotted testing last year. That model will be revealed in finished form at the end of 2016 and go on sale in early 2017.

The spy shots were grabbed near a Yamaha test facility in Italy and show the firm are taking their new middleweight adventure bike’s off-road capabilities seriously as the bike looks to be sporting a 21in front and 18in rear wheel for decent performance over tough terrain.

In order to keep costs manageable it’s unlikely Yamaha have messed much with the engine other than the necessary changes it will have to make for Euro4 regulations, which come into force for all new bikes sold after January 1, 2017. That means the 689cc CP2 motor from the current MT-07 will still deliver around 75bhp and 50ftlb torque in a useable and friendly manner; perfect for an adventure bike that may actually be taken on to terrain more demanding than a gravel drive.

Yamaha have been extremely competitive in terms of pricing with the MT range and we don’t expect this Ténéré to be any different. The base model MT-07 is £5349, and we expect this Ténéré version to arrive at less than £7000 to challenge the likes of the BMW F700GS and Triumph Tiger 800 range.

It would appear the engine is the only major carry-over part from the MT-07 visible. The long-travel front fork is new, the plastics, screen and bars are freshly designed, as is the subframe which looks to be a mix of cast aluminium sections and steel tubing. The swingarm is different too, while it’s interesting to note that Yamaha are running Brembo brake calipers front and rear. This is serious departure, and a first in the current range, with the firm usually opting for Nissin or unbranded OE items. This could also hint at the use of Bosch braking control, most commonly linked to Brembo hardware – despite this test mule seemingly being devoid of even rudimentary ABS. It will have to include ABS to conform with Euro4.

One of the biggest issues manufacturers are discovering with Euro4 is getting engine and exhaust noise under control but looking at the whopping size of the single, side-mounted silencer (which may well change before full-production) it’s clear Yamaha has plenty of exhaust volume to utilise for both the suppression of noise and housing the catalyst.

This new MT-07 variant is the latest in an ever-growing list of bikes that have been part of Yamaha’s recent resurgence around the world, with more new models being added all the time. The R1-based MT-10 will arrive in dealers imminently, and while Yamaha have said there will be no MT-10 Tracer, we understand that the 999cc crossplane crank four-cylinder engine may well spawn further models.

This MT-07 will slot in underneath the current XT1200Z in the range, a bike which is also due for an update any time soon as it’s been almost unchanged since 2010, and isn’t Euro4 compliant. The single-cylinder XT660Z and all other XT660 models have now been dumped by most Euro markets, and are no longer imported here.

While the XT660 has been popular with hardcore off-road adventure riders, the larger 1199cc parallel-twin has never really been much of a success. Compared to the massive-selling BMW R1200GS and other rivals in the class, the XT1200 is underpowered, heavy, a little characterless and – despite the authentic history of the name from rally raid success in the 1980s and 90s.

Expect to see the new middleweight in finished form in 2017, and on sale soon after.

Built for adventure
This bike is running in early prototype clothing, but glimpses of the upright front fairing and side panels, along with a more off-road orientated front mudguard can still be seen lurking beneath the disguises. It would appear there is real bodywork underneath, which looks production-ready. The screen also looks finished and is non-adjustable.

Spoked rims are preferred for off-road work and in the sizes we think they are in here (21in front and 18in rear), this MT-07 is clearly intended to go off-road with some ease. A larger, thinner front wheel is more stable over rough terrain and the thin tyres cut through without clogging.

This test mule has a subframe for panniers, with a locating mount down near the pillion pegs, and nodes on the rail where the panniers would clip in. If the Super Ténéré is anything to by, they’ll be aluminium top-loaders.

It’s not just the wheels that show the off-road intent of this bike. The footrests appear to have removable rubber inserts, the indicators at the front have been moved up high out of the way and there is also a metal sump guard that looks to have fallen short of protecting the lower chassis rails. The foliage trapped in the sidestand is unlikely to make it to production!

Although these spy shots are very clear we still cannot see exactly if this front light is a test bike lash-up or a disguised production version. The black X that covers the light could well be a new styling theme Yamaha will add to adventure models – equally it could be a temporary engineering solution.

The suspension has longer travel compared to the MT-07. The new inverted fork – the MT-07’s is conventional – is longer, and while we can’t see the rear shock we expect it to be significantly uprated over the current bike’s cheap and easily overwhelmed unit. The swingarm is an all-new and less complex design than on the MT-07.

Brembo front and rear, with twin four-piston calipers on the front, and a two -piston single caliper on the rear. With an apparent lack of ABS, the system is still a long way from finished, and is either likely to adopt Bosch ABS or go for a completely new system.

Barring mods to enable the engine to pass strict Euro4 emissions reg, we expect the 689cc, eight-valve parallel-twin motor from the MT-07 to be slotted straight into this variant. That means 75bhp and 50ftlb torque – more than enough for this type of bike.